About the autumn berry

The autumn berry is a delicious and incredibly versatile fruit

Autumn Berries are the small, red, edible fruit of the Autumn Olive (Elaeagnus umbellata, related to, but not an olive).  The trees have fragrant ivory flowers and silvery-green leaves.

The USDA found Autumn Berries to contain 17 times the Lycopene found in tomatoes along with high levels of protein, vitamins A, C, and E, and essential fatty acids.  Lycopene “is considered an important phytonutrient, and is thought to prevent or fight cancer of the prostate, mouth, throat and skin, and to reduce the risk of cardiovascular disease” (Black, B.L. and I. Fordham. 2005).

The berries are sweet and tart when they ripen in the fall and can be used to make a wide variety of food products. Throughout the year, the trees provide shelter and food for wildlife and they have nitrogen-fixing root nodules that help them adapt to poor soil.

According to the USDA, Autumn Olive can be quite persistent once established, growing back from the roots when cut down or mowed off. Due to this persistent nature, seed dispersal by wildlife, and the ability to thrive in poor soils, feral populations of Autumn Olive have established throughout the Eastern and Central U.S. and Canada. As a result, Autumn Olive is now on several invasive species lists.

Conservationists brought the Autumn Olive tree to North America from Asia in the 1930s-1970s and planted them along the edges of highways, farms, lakes and rivers.  They knew Autumn Olive can serve ecological functions (wind breaks, erosion control, wildlife habitat and forage) and regenerate soil once destroyed by agriculture and human development.

In the disturbed soils of North America, the Autumn Olive adapted and proved itself to be uncontrollable.  Birds spread the Autumn Olive seeds to the places where foreign colonizers had cleared and tilled ancient prairies, wetlands, savannas, and forests.  The Autumn Olive moves into these depleted lands and begins the processes of succession and regeneration of the soils.  Almost immediately, diversity emerges in what at first appears to be a monoculture of Autumn Olive. On once bare land, insect, fungal, bird, and mammal populations crop up while taller trees tower above and eventually shade out the sun-loving Autumn Olive. With time, nature regains balance and heals itself from the wounds of human disturbance.

Unfortunately for the Autumn Olive, the time frame needed for land to regenerate itself is too long for the modern human attention span.  Moreover, the profit potential of endlessly battling introduced species and the aesthetics of manicured lawns and “native-only” landscapes prevailed.  Beginning in the 1980s, the Autumn Olive and many other “successful but misunderstood” species were declared invasive in many places they were so purposefully installed.  Across North America, conservationists now educate future generations about the “dangers of aggressive foreign invaders” and encourage us to only allow species that behave and were present before some uncertain pre-colonialist point in time.

We at Autumn Berry Inspired sympathize with the economic and ecological damage caused by our colonialist history of moving species across the planet willy-nilly.  We as a culture have a long way to go toward developing healthy relationships with all wildlife, both “native” and “introduced.”

That is why we sell Autumn Berries as puree and seedless preserves with the message that we should “Make jam, not war” with our natural surroundings. We have the opportunity to control exotic species like Autumn Olive and Asian Carp with industry, knowledge and compassion, rather than indoctrination, extermination, and mono-cropped agriculture.

Our mission is to show how this man-made ecological “problem” is an untapped resource and a misunderstood part of our North American ecosystem.

With your support, we may all come to appreciate and Enjoy Elaeagnus.

About Restoration Agriculture
Let’s harvest all the autumn berries we can, but not plant any more. 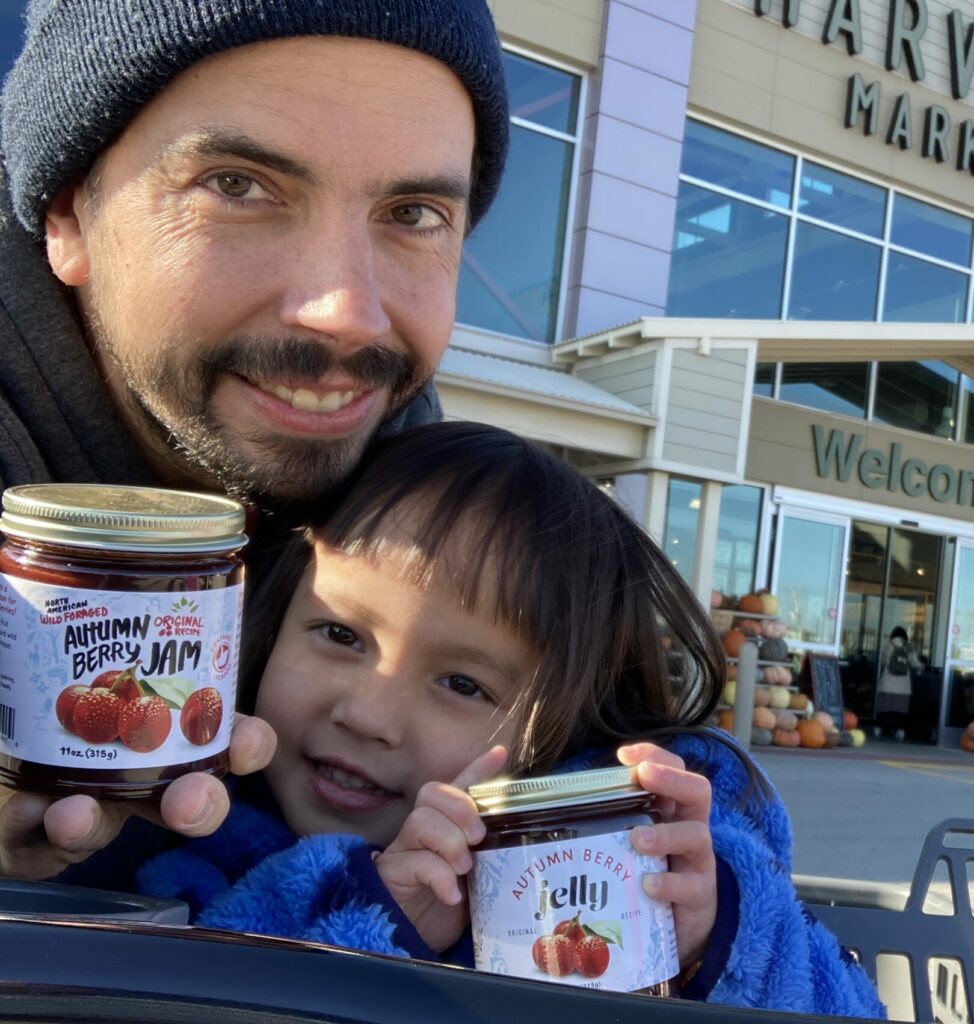 Facebook-f Linkedin-in
Contact us
Autumn Berry Inspired
Autumn Berry Inspired was born to share nutritious and inspiring experiences. While nurturing our bodies, Autumn Berry products enhance our lives by raising ecological awareness and emboldening us to find new solutions to the world’s pressing issues. We created this company to promote the maximum utilization of resources and spark a chain reaction of planet-saving projects.
Company
Get in touch